Posted by Vicky Paterson on 7/25/2014 to Commonwealth Games 2014
Share |
The on going heat wave in Glasgow has brought people out, and with the crowds gathering at Commonwealth events, and the weather set to get even hotter this weekend is sure to bring out a great atmosphere in the city and some great sporting moments.  Day two of the Games saw our teamwear alliance partner Scottish Hockey in action as well as events in cycling, swimming and weightlifting to name a few.

This morning we were glued to the Hockey taking place at the recently developed Glasgow Hockey Centre at Glasgow Green.  Mainly to watch our partner Scottish Hockey in action in PSL designed and printed kit.  The Men's side took on South Africa in their opening game and were unlucky to lose 2-0 after a controversial second half penalty and field goal 4 minutes from full time.  Although disappointed by the loss the men's side took it in their stride and instead enjoyed the experience and looked forward to the next game. The Scots now sit at the foot of Pool A following India’s 3-1 win over Wales earlier today and will face the Indians tomorrow at 4pm.  Scotlands Alan Forsyth talked about the importance of looking ahead after the game "We’ll look to improve on our performance today but we have to be more consistent.”

The Scottish Women's side took on Malaysia in Pool B of the competition with a 2-0 victory thanks to striker Ailsa Wyllie.  A well earned victory and with Australia proving their next challenge on Sunday we are excited to see the side in action again.

There was more success for Scotland in the cycling with Neil Fachie and his pilot Craig Maclean winning Gold in the para-sport 1000m time trail tandem.  While Scotland's Dan Wallace won gold in the 400m Individual Medley and Sarah Clarke rounded the medals tally with a win in the 63kg Women's Judo competition. 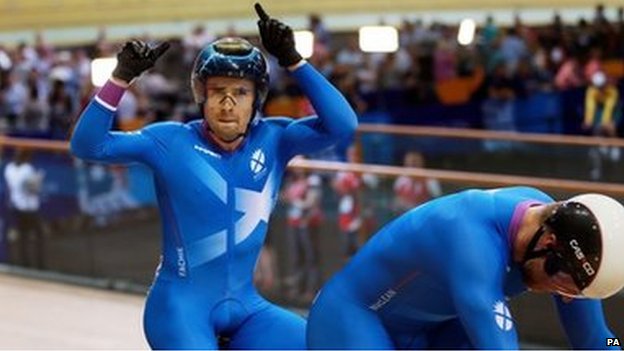 It was another great day for Team Scotland at the Games, and with the Rugy 7's competition kicking off tomorrow we are looking forward to not only getting to see our boys in blue in action but also seeing Uganda playing in the shorts we printed this morning.  It is set to be an action packed day at Ibrox and we will be there to report on all the action.